Back to all posts

After a wild night in Washington, DC (although, not that wild held up against Memphis), we were up and in the car for Richmond, VA around 10:30am. I had been warned that the traffic between the two cities can be, and I quote, "f**key". That was an accurate description. What should have been an hour-and-a-half drive took about four hours. We arrived in Richmond with some time to kill before we had to be at the venue, so we headed in to town and found a Persian restaurant with some bad ass Gyros. Yum!

Our contacts in Richmond were Kim's cousin and cousin-in-law, Elizabeth and Jay. They recently opened a salon in Richmond, and have been involved in the local art/music scene for many years. They set up our show at Hardywood Park Craft Brewery with some great local artists including Liza Kate, Jonathan Vassar, and Sarah White & The Pearls (which included, I was told, the original Beefcake the Mighty from GWAR). Initially, were were skeptical as to how the whole thing was going to go. No sound guy, no event coordinator, no anything except for 150 or more people left over from the beer-tasting that went down earlier in the day. It turned out, as has generally been our luck thus far, that the show went really well. Folks responded favorably to our music, we sold a few CDs, and we had our body weight in free beer. Good times! Jay and Elizabeth were more than accommodating with a place to stay, pizza, and beer.

Sunday morning we awoke and packed up the truck for the return trip to central NC. Before we left town, we stopped by Hollywood Cemetery, where I got my Civil War history fix (pictured below is a monument to 18,000 Confederate dead with the inscription, "Numini et Patriae Asto"), and a great café called Cary Street Café with an old-time jam going on. We were heading to pick up Cody's girlfriend, Stephanie (who will be traveling with us for a couple days), at Raleigh-Durham International Airport around midnight. So we hung around Durham for a couple hours and ended up playing a spontaneous open mic at James Joyce Bar. Surprisingly, we made several contacts and sold a few CDs. Talk about making lemonade! We grabbed Stephanie from the airport and headed back to Saxapahaw and Cody's aunt Max's (of venison pot roast fame). We crashed HARD and got up the next morning for another beautiful North Carolina summer day. 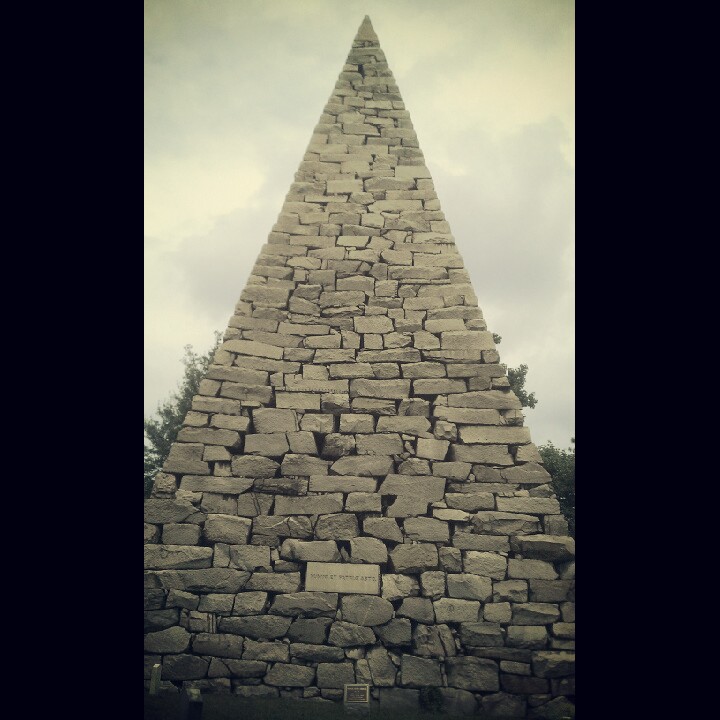